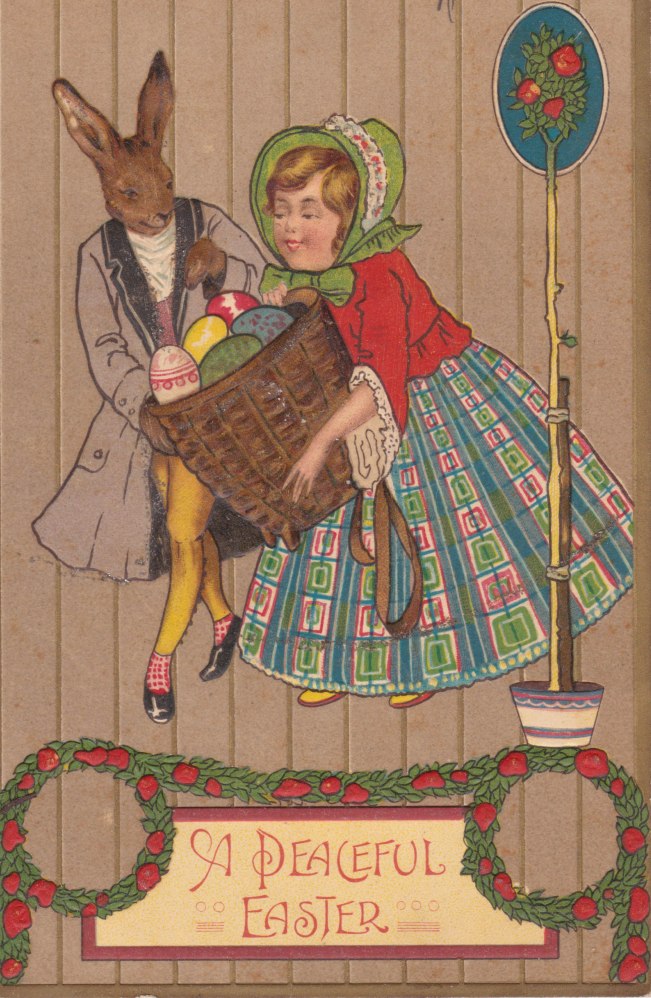 Clara was missing her friend, Elizabeth, who might as well have been a thousand miles away. Though Elizabeth was living in nearby Piqua, a stretch of about thirty miles from Dayton, the trip by Western Ohio’s interurban trolley would be an all day affair in 1907. Besides there were so many chores at hand and Mama expected her to keep a watchful eye on Beatrice, Eddie, and Mary. The life of a fifteen-year old girl in Dayton’s Victorian Era was not where one could afford a frivolous day trip.

But the two found another way to stay in touch.

With the price of a penny postage stamp, postcards were becoming the new trend of communication in 1907 and collecting these colorful cards was a favorite hobby for many young girls.

On February 27, 1861, the US Congress passed an act that allowed privately printed cards, weighing one ounce or under, to be sent in the mail. That same year John P. Charlton (other places seen as Carlton) copyrighted the first postcard in America.

The first commercially printed postcards were introduced in 1893 at the Chicago World’s Fair, issued as souvenirs of the historical event. In 1901, the United States Postmaster General granted private printers the right to use the term “Post Card” instead of “Private Mailing Card” on their stock. Until 1907, the back of the postcard was for the mailing address only. There was no space for a written message.

On October 1, 1907, printers were permitted to change the design of postcards to a “divided back.” Now a vertical line is added so the mailing address is on the right and a personal message can be written on the left. This seemingly simple change brought the postcard into the Golden Age of Postcards (1907-1915).

From the New York State Library

The decade between 1905-1915 – the Golden Age of Postcards – saw postcard collecting reach a zenith of staggering proportion. Literally millions of postcards were printed, imported, sold and mailed. Official U.S. Post Office figures for the year ending June 30, 1908 revealed that approximately seven hundred million postcards had been mailed in this country. By 1913 the total number mailed had increased to over nine hundred million, and, by this date, the craze was reportedly on the decline!

In the days long before heart-eyed emoticons represented how you felt, another trend found a renewal along with the colorful postcards in these early days of the twentieth century.

The not-so-secret Language of Stamps had already been a thing with young lovers sending letters as a matter of courtship. This is one interpretation, which makes me wonder if it differed by region and if the occasional misunderstanding took place.

Courtship by correspondence sounds rather romantic and innocent, doesn’t it? Like those notes you’d be passed during Social Studies in middle school written with “Do you like me?” and had two check boxes for “Yes” or “No.” Kinda sweet and awkward.

As good friends, I suspect Elizabeth’s stamp language to Clara (see image above) was more of a “Hey, girl! Miss you!” than following any other postage protocol of the time.

Clara’s postcard collection ranges from early 1907 (her mother died unexpectedly later that year) to 1909. By 1911, she was married to George Washington Sword, a industrious young man who’d arrived from his Maryland farm to start a new life. But that’s a story that needs its own page.

In honor of today’s holiday, I want to share with you the Easter cards that Clara kept in her collection. A brief look at the designs of the time period of 1907-1909 and what appeals to a Catholic teenager of that era. I hope you enjoy this gallery of flowers, chicks, and maidens of long ago.

And a special call out to those fine, fine legs on Mr. Easter Bunny in the second card.

And I leave you with a postage stamp joke from 1910. I don’t know, does make you feel vaguely uncomfortable? No, it’s just me? Different times …

The Boga home at 128 Ashley Street is gone today, although a few houses of that era remain in the neighborhood. Ashley Street is off Brown Street, near the strip of restaurants that feed the students of the University of Dayton. If we could overlay maps of the two time periods of 1909 and today, the Boga home would be in the shadow of Miami Valley Hospital.

See what else we’re up to